Pride Cleaners, one of the city's finest and most exuberant examples of postwar modernism--and a good dry cleaners, to boot--is for sale.

Designed by architect Gerald Siegwart, the building, 558 East 79th St. has been an architectural icon in the Chatham community since 1959. With its angled concrete hyperbolic parabaloid roof and freestanding marquee-like electric sign, Pride brought a bit of the Space Age to the otherwise 1920s business strip. 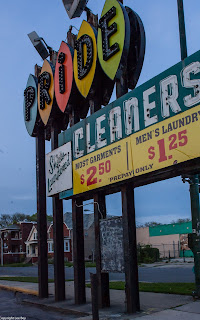 It's a fine piece of architecture. The self-supporting roof touches the ground in the rear of the building, then shoots skyward. Beneath is a glass curtain wall that allows views inside the cleaners, revealing original signage, color schemes and doses of neon. 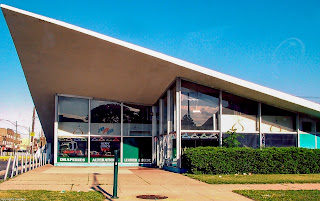 New technology of the time made dry cleaning faster. Siegwart used near futurist architecture to convey this breakthrough. Pride is showing its age, but is nearly unaltered since its completion--with the exception of a 1966 addition designed by Siegwart.


Fortunately, the building is being marketed as an active, stable business and not a teardown, according to the listing brochure from Matanky Realty, meaning Pride Cleaners could continue to be preserved under new ownership.

But it's a thing that shouldn't be left to chance. Now is a good time for the city to step in and seek protected landmark status for Pride, its sign, and critical portions of the interior. The protections would make sure the building is safe from demolition and would help insure alterations would be in line with Siegwart's vision. It would also draw attention to Chatham's overall wealth of modernist residential and commercial architecture.

Given Mayor Rahm Emanuel's fondness for the South Side neighborhood, such a move would be another needed feather in the community's cap.
Posted by LEE BEY at 9:33 AM

LEE BEY
Laboring in the vineyards of architecture/urbanism as a writer, thinker, adviser, lecturer and photographer. Frequent architecture contributor for CBS2 Chicago and WGN Radio. Host/producer of Architecture360 podcast on the Rivet Radio app.